You Are Here: Home → China 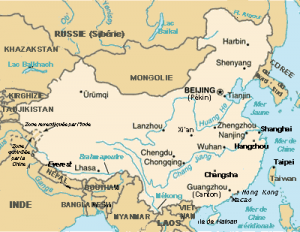 China is an East Asian country. It is the most populous state on the planet, with more than 1.4 billion inhabitants. It is also one of the largest countries in the world. It shares borders with many countries: Russia and Mongolia to the North, North Korea to the East, Vietnam, Laos, Burma (Myanmar), India, Bhutan and Nepal to the South, Pakistan, Afghanistan, Tajikistan, Kyrgyzstan and Kazakhstan to the West.
This huge country has emerged as one of the world’s leading economic powers over the past 30 years, taking Japan‘s second place in 2010, behind the United States. Special economic zones have been created to promote the development of certain regions.