You Are Here: Home → Macau 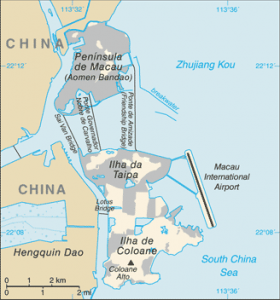 A drop of wealth in the Chinese Ocean

Macau is a special administrative region of China located in the south of the country. Formerly Portuguese territory for 400 years, it was retroceded to Beijing in December 1999. It is located opposite Hong Kong (another former colony, English this time), on the southwest side of the Pearl River Delta.