Terrorism is a method of repeated violent action inspired by anxiety, used by individual clandestine actors, in clandestine groups or states, for idiosyncratic, criminal or political reasons, according to which – as opposed to assassination – direct targets of violence are not the main targets.
Immediate human victims of violence are usually chosen at random (targets of opportunity) or selectively (representative or symbolic targets) in a target population and serve as message generators.
Communication processes based on violence or threats between terrorist (organizations), (potential) victims, and main targets are used to manipulate the main target audience, making it a target of terror, a target demands, or a focus of attention, depending on whether intimidation, coercion, or propaganda is the primary goal.
Definition: A.P. Schmid, 1988 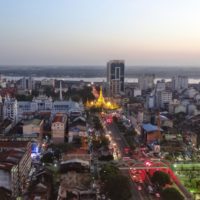 February 1, 2021
The Burmese army has just orchestrated a coup d’État, the 4th since independence in 1948. Head of State Win Myint and the country’s iconic…
END_OF_DOCUMENT_TOKEN_TO_BE_REPLACED

December 21, 2018
Reporters Without Borders has just published its annual report on the state of violations of press freedom worldwide. The number of journalists, citizen journalists…
END_OF_DOCUMENT_TOKEN_TO_BE_REPLACED