You Are Here: Home → Kyrgyzstan 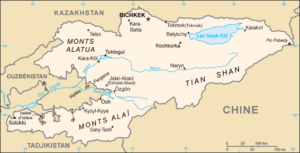 Kyrgyzstan is a mountainous country located in Central Asia. This former republic of the USSR gained independence when it broke up in 1991. It shares borders with Kazakhstan to the north, China to the south-east, Tajikistan to the southwest, and Uzbekistan to the west.