You Are Here: Home → Kazakhstan 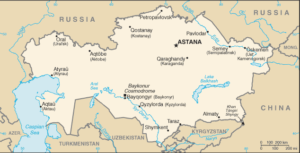 Kazakhstan is a landlocked country (without access to the sea, except the Caspian Sea, which is a closed sea). It is part of the former Soviet republics of the USSR, from which it has been independent since 1991. It shares borders with Russia to the north and west, China to the east, Kyrgyzstan, Uzbekistan and Turkmenistan to the south. It is bathed by the Caspian Sea to the west, and has the northern half of what remains of the largely dry Aral Sea.

Historically based in Almaty, the big city in the south of the country, power moved to Astana in the north in 1997 under the leadership of the head of state. The city, which has become capital, has since grown considerably and has gradually become a large urban center, which continues to grow and reached a million inhabitants at the end of 2017. In 2019, it is renamed Nur-Sultan, in the honor of former dictator Nursultan Nazarbayev.