You Are Here: Home → Pakistan 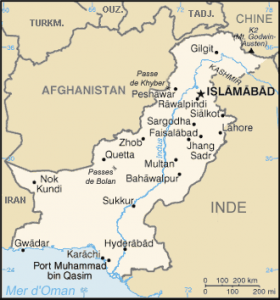 Pakistan is an Islamic Republic of the Indian subcontinent bordered by Iran to the southwest, Afghanistan to the west, China to the north, India to the east, and by the Arabian Sea to the south. It was founded on August 14, 1947 at the end of the partition of the British Indian Empire, in the form of a state consisting of two parts geographically separated by nearly 1600 kilometers of Indian territory, the current Pakistan to the west, and what has become Bangladesh to the east, in the Bay of Bengal. Pakistan was reduced to its western part only after the Bangladesh war of independence in 1971.