You Are Here: Home → Bangladesh 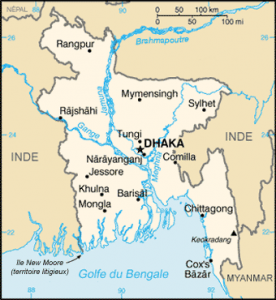 Bangladesh is a victim of its geography

Bangladesh is a South Asian country that is part of the Indian subcontinent. Located in the north of the Bay of Bengal, almost enclaved in India, it also has a small border with Burma.

The repeated floods that are swamping the country are the cause of growing underdevelopment. The geographical situation favors this, with the meeting of two of the largest rivers in the world, the Ganges and the Brahmaputra.
The country can not get out of this perpetual crisis. The majority of the territory is subject to flooding, even though the population density of 1,144 inhabitants per km2 is the largest in the world, with the exception of micro-states. The countryside is more densely populated than some cities in the United States!