You Are Here: Home → Afghanistan 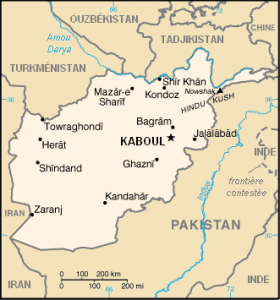 Afghanistan is a landlocked Central Asian country bordered by Pakistan, China, Tajikistan, Turkmenistan, Uzbekistan and Iran.
Since the arrival of the democracy established by force by the international community, the country has undertaken its modernization, that is, its reconstruction. It is slow, the financial means are limited, and the promises of funding from major donor countries have not been fully met.
However, mortality has declined significantly, especially infant mortality, which has been halved, and health and social conditions are improving. Access to drinking water has also increased significantly, from 30.3% in 2000 to 55.3% in 2015.
On the other hand, the increase in the population of large cities, with the arrival of peasants fleeing agricultural areas riddled with anti-personnel mines, is slowing down the country’s economic growth, which is largely based on agriculture.