You Are Here: Home → Kurdistan 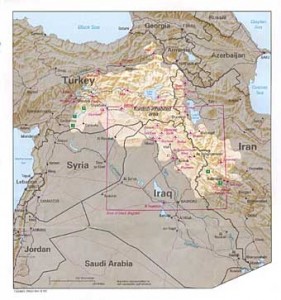 An oppressed people fighting for self-determination

Kurdistan is a mountainous and highland region of West Asia and Central Asia whose territory extends from Turkey in the west to Iran, via Iraq and Syria, with a few small islands in Armenia, Georgia, Azerbaijan, Turkmenistan, Kyrgyzstan and Kazakhstan.
The unofficial capitals of the different territories are Erbil in Iraq, Sanandaj in Iran, Amed in Turkey.
For hundreds of years, if not thousands, the Kurds have been oppressed by the four main countries which now occupy their territory, after the different colonizing countries, mainly Europeans.
But the foreign powers, including France, the USSR and the United Kingdom, in the aftermath of the first and second World Wars, cut off the Ottoman territory without taking into account the Kurdish claims. Since then, real genocides have been perpetrated throughout Kurdistan, without disturbing the oil operations here and there, the oil of which the subsoil of Kurdistan is generously provided.
The Kurdish population, estimated at 44 million people (2016), is the largest “nation” without a state, aspires to independence, or at least autonomy, especially after the wars that have followed one another in Iraq. Moreover, in this country, the Kurdistan region of Iraq is de facto autonomous in its operation. It brings together 5,472,436 inhabitants (2015) over 46,862 km2 in four Iraqi provinces: Arbil, Dahuk, Sulaymaniyah and the last created Halabja.
Gassings, assassinations, genocides, collective massacres, have been the lot of Kurds in Iran, Iraq, Turkey and Syria for decades.
From now on, the Kurdish people see in the autonomy of Iraqi Kurdistan and the military reconquest of Syrian Kurdistan, especially against the Islamic State Organization (OEI), a hope in the struggle for the global self-determination of the territory.