You Are Here: Home → Georgia 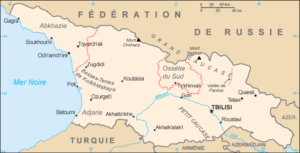 Georgia is a Western Asian country located on the coast of the Black Sea in the Caucasus, straddling Eastern Europe and Asia. It is often considered to be culturally, historically and politically speaking part of Europe, while being geographically, physically in West Asia. It is surrounded by Russia to the north, Azerbaijan to the east, Armenia and Turkey to the south. Two regions of the country, Abkhazia and South Ossetia, unilaterally declared their independence with the military help of Russia.