You Are Here: Home → Turkey 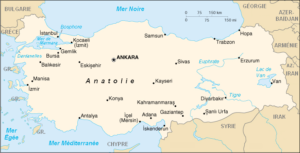 Turkey is a transcontinental country located on the borders of Asia and Europe. It has borders with Greece, Bulgaria, Georgia, Armenia, Azerbaijan (Nakhchivan), Iran, Iraq and Syria. It is bordered on the north by the Black Sea, on the west by the Aegean Sea and on the south by the eastern part of the Mediterranean Sea. Eastern Thrace, the European part of the country, and Anatolia (Asia) are separated by the Sea of Marmara and the Straits of the Bosphorus (or Istanbul Strait) to the east and the Dardanelles to the west. Turkey is a parliamentary republic, its official language is Turkish and its capital is Ankara.