You Are Here: Home → Syria 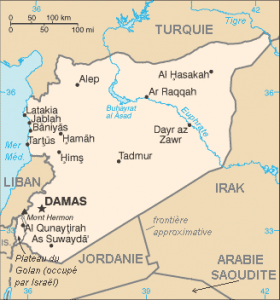 Very old civilization, Syria is now in the grip of civil war

Syria is a country located in West Asia (Middle East) on the eastern coast of the Mediterranean Sea. It shares borders with Turkey to the north, Iraq to the east, Jordan and Israel to the south, and Lebanon to the west. Part of Kurdistan is on its territory in the north-east of the country.