You Are Here: Home → France 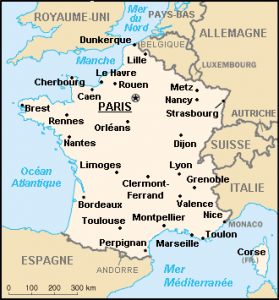 France is a country in Western Europe sharing borders with Belgium and Luxembourg to the north, Germany, Switzerland, Italy and Monaco to the east, Spain and Andorra to the south. Through the Channel Tunnel, it also shares a border with the United Kingdom.
Its population is about 67,4 million people (2021), of which 65.25 million people live in the metropolitan France, the rest being distributed in overseas departments and regions.
For three decades, the western and southern regions of the country have seen their populations grow much faster than the industrial north and east, in relative decline, with the notable exception of Paris and its concentrated large urban area of approximately 13 million inhabitants (2018).