You Are Here: Home → Spain 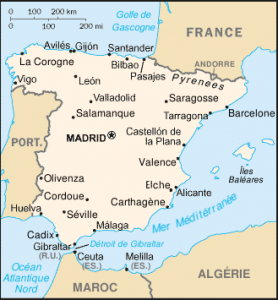 Spain is a country of Southern and Western Europe. It occupies most of the Iberian Peninsula, which it shares with Portugal. It also shares a mountainous border (Pyrenees) in the north with France, and Andorra, a small landlocked country in between. On the Mediterranean coast, it has two landlocked territories in Morocco, Ceuta and Melilla. It is bordered by the Mediterranean Sea to the east, and the Atlantic Ocean to the north and west. To the south, it is Africa that faces Gibraltar, the British territory claimed by Spain, and the southern coast of Andalusia, by the Strait of Gibraltar, separating Europe from Africa from only 14 kilometers. Spain also has the Balearic archipelago, east of its Mediterranean coasts, and the Canary Islands archipelago off the coast of Morocco in the Atlantic.