You Are Here: Home → Italy 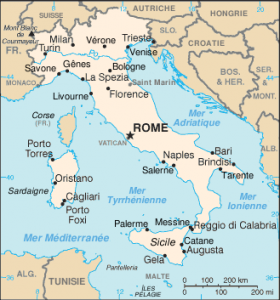 Italy is a country of Southern Europe. It consists of a peninsula located in the center of the Mediterranean Sea and island parts formed by the two largest islands of this sea, Sicily and Sardinia, and several other smaller islands. It shares borders with France to the north-west, Switzerland and Austria to the north, Slovenia to the north-east. It hosts two small landlocked states: the Vatican, located in the heart of its capital Rome, and San Marino, located in the north-central of the country.