You Are Here: Home → Antarctica 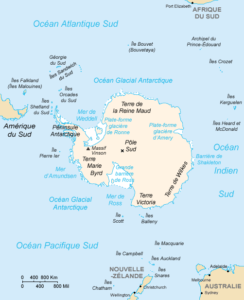 A wild continent to protect

Antarctica is Earth’s southernmost continent. It contains the geographic South Pole and is situated in the Antarctic region of the Southern Hemisphere, almost entirely south of the Antarctic Circle, and is surrounded by the Southern Ocean. About 98% of Antarctica is covered by ice that averages 1.9 kilometres in thickness, which extends to all but the northernmost reaches of the Antarctic Peninsula.
Antarctica is a totally wild continent and protected from human activities by international treaties. Scientific activities, and recently tourism, are the only officially tolerated human presence in this particularly hostile land. The climate is indeed unfavorable for humans: 5 degrees Celsius on the coast in summer, and -35 ° C to -70 ° C in winter!

The ice sheet that covers the continent is in some places 4500 m thick! The ice covers a total area, including the marine ice zones (pack ice), of 30 000 000 km2, more than twice the area of the icy continent. During the austral summer, up to 3% of the territory is left without ice.

A number of countries have territorial claims on this huge virgin space:

However, none of these claims is recognized except by the states themselves. Some of them even have superimposed claims. But all of them respect treaties that prohibit the exploitation or militarization of the territory, which has been considered internationally since 1959. There are about 40 stations, of which 27 are permanent. These are official scientific research stations. Some of them house a few people, but others like McMurdo, station of the United States, have about 250 people permanently. Many countries have scientific bases, meteorological in particular, of which one in South Pole exactly, Amundsen-Scott, named after the first man, a Norwegian, to arrive at this place, and British Scott, who died on an expedition to reach the South Pole.