You Are Here: Home → Australia 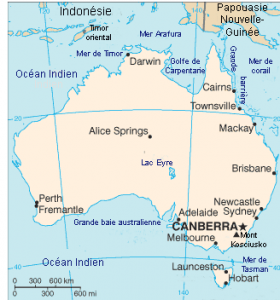 Australia is a huge country in the southern hemisphere whose area covers most of Oceania. In addition to the island of the same name, Australia also includes Tasmania as well as other islands of the Southern Pacific and Indian Oceans. Neighboring nations include Indonesia, East Timor and Papua New Guinea to the north, Solomon Islands, Vanuatu and the French territory of New Caledonia to the northeast, New Zealand to the southeast, and the French territory of the Kerguelen Islands (TAAF) west of the Australian islands Heard and McDonald.