You Are Here: Home → Norfolk Island 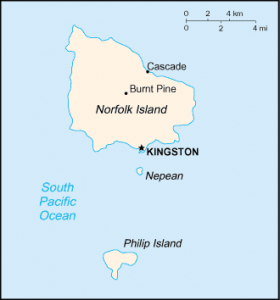 Norfolk Island is a self-governing territory associated with Australia, located midway between New Zealand, New Caledonia and Australia.
It is populated including a part of the descendants of the famous HMS Bounty, who arrived there in the middle of the 19th century because Pitcairn, the island where most of these descendants are still, began to be too populated.