You Are Here: Home → Slovakia 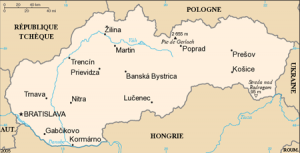 Slovakia is a country located in central Europe, in the heart of continental Europe and east of the European Union, of which it has been a member since 2004. Its border countries are Poland to the north, Ukraine to the east, Hungary to the south, Austria to the southwest and the Czechia to the northwest. From October 28, 1918 to March 21, 1939, and from April 4, 1945 to December 31, 1992, she was part of Czechoslovakia.