You Are Here: Home → Samoa 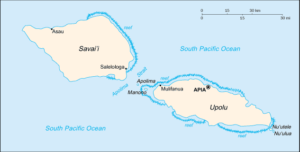 Requests for reunification of the two Samoa

Samoa is an independent state of Western Polynesia in the South Pacific. They are located east of French territory Wallis and Futuna, south of Tokelau, north of Niue and west of French Polynesia. Samoa comprises four inhabited islands (Upolu, Savai’i, Manono and Apolima) and six uninhabited islets.

First state to gain independence in the Pacific on 1st January 1962, Samoa (formerly Western Samoa), are increasingly demanding reunification with the party still belonging to the United States, American Samoa. This American part has a much higher standard of living, given the financial and economic support of the United States.
The Samoa population lives mainly from agriculture, fishing and tourism, the latter being increasingly dominant in the country’s overall income. It is estimated that the number of Samoans living outside the country is higher than those living in the archipelago, which has a population of just under 200,000. Emigration is indeed very important, especially to the United States and New Zealand.
Interesting Anecdote: The famous British writer Robert Louis Stevenson, who lived the end of his life in Samoa, is buried in Apia.