You Are Here: Home → Montserrat 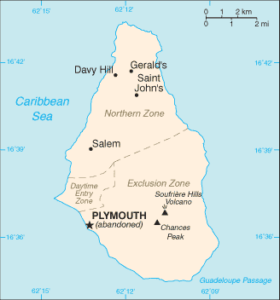 Montserrat is a small island in the Caribbean, a United Kingdom dependency, and a member of the Organization of Eastern Caribbean States (OECS). It is located north of the French island of Guadeloupe, west of Antigua, and south of Saint Kitts and Nevis.

Its capital and the entire southern area of the island were abandoned after being destroyed in 1997 by volcanic eruptions. About 8,000 of the island’s 12,000 inhabitants fled to Antigua and the United Kingdom. Since then, some have returned on the spot, in the northern part of the island, the only habitable zone, where about 1220 people were able to stay after the forced evacuation to the south.