You Are Here: Home → Saint Kitts and Nevis 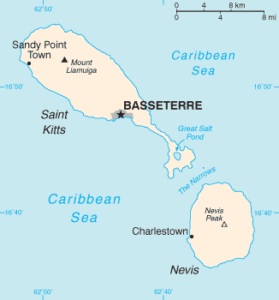 Saint Kitts and Nevis is a state located in the Lesser Antilles, in the Caribbean region, consisting of the islands of Saint Christopher (Saint Kitts) and Nevis, associated in the form of federation. To the north-northwest lie the islands of Sint Eustatius and Saba, French islands of Saint Barthélemy and Saint-Martin, Dutch island of Sint Maarten, and Anguilla. To the east and northeast are Antigua and Barbuda, and to the southeast is the small uninhabited island of Redonda, and the island of Montserrat.

As often in the Caribbean, small islands and small states like Saint Kitts and Nevis are tax and tourist havens. Thus, the former French-English colony, from which originated the Creole spoken Caribbean, does not escape the rule. And as in many cases, suspicious or even mafia-laden money-laundering and drug-trafficking activities threaten the country’s credibility internationally.
For its part, tourism represents an increasingly important part of the activity, sugar cane being in sharp decline.