You Are Here: Home → Antigua and Barbuda 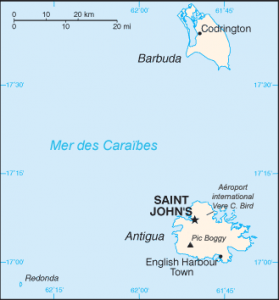 Antigua and Barbuda is a state in the Caribbean, with the capital Saint John’s. It is located about fifty kilometers north of Guadeloupe (France) and north-east of Montserrat. The state is made up of two main islands, the island of Antigua and the island of Barbuda, as well as a few smaller islands, including Redonda, a volcanic island of about 1.6 km2, which was mined until at the beginning of the 20th century. He is part of the British Commonwealth and his chief of state is Elizabeth II. It is also part of the Bolivarian Alliance for the Americas (ALBA).