You Are Here: Home → Curaçao 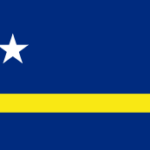 Curaçao is one of the Leeward Islands in the Lesser Antilles (Caribbean), forming an autonomous state within the Kingdom of the Netherlands since the dissolution of the Federation of the Netherlands Antilles on October 10, 2010. It has about 160,000 inhabitants for an area of 444 km2. Its capital is Willemstad. It is located off the coast of Venezuela.