You Are Here: Home → Angola 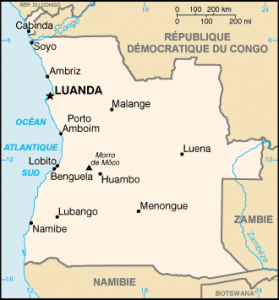 Angola is a country in southwestern Africa bordering the Democratic Republic of Congo, Congo, Namibia and Zambia. This former Portuguese colony is a member of the community of Portuguese-speaking countries. It is the second Lusophone country by its size and its population, after Brazil and in front of Mozambique.