You Are Here: Home → Somalia 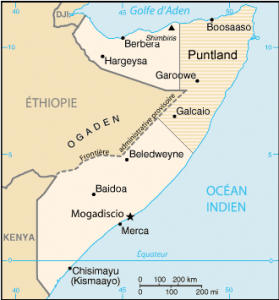 The government is trying to get things back on track

Somalia is a country located at the eastern end of the Horn of Africa, bordered by the Indian Ocean. It shares borders, in its current reduced configuration, with Puntland to the north, Ethiopia to the northwest, and Kenya to the southwest. Formerly the northern part of the country, Somaliland and Puntland are independent in fact.