You Are Here: Home → Honduras 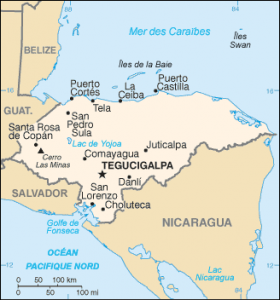 A rich country but unable to grow

Honduras is a country located in Central America. It is bordered the west by Guatemala, to the southwest by El Salvador, to the southeast by Nicaragua, to the south by the Pacific Ocean at the Gulf of Fonseca, and to the north by the Gulf of Honduras, a large inlet of the Caribbean Sea.

It’s a country very rich in natural resources: mines, forests (illegal deforestation is a major concern), agriculture, industries, especially textiles, are the strengths of its economy, which has in recent years seen high growth rates.
However, the vast majority of the population does not see their standard of living increase, with 59% of Hondurans still living below the poverty line (2019).
Farmers will regularly swell the slums that swarm around large cities, especially the capital Tegucigalpa, whose population has exploded to almost 3 millions, and San Pedro Sula, which has become the second largest urban area in the country with 2.5 million inhabitants.
Infrastructure, including health, social, education, transportation, etc. are totally inadequate, and many problems may be difficult to solve: delinquency, prostitution, security, water sanitation, pollution, car traffic.
The country is too often managed by the authorities in the manner of a “banana republic”, violence against minorities, a strong component of which is the Amerindian community, and corruption remain endemic in Honduras.
According to the UN, Honduras is also the most violent country outside war zones. A sad record. The weakness of the rule of law clearly hampers the development of the country, because of its isolation in the international community, and in particular of some of its neighbors.