You Are Here: Home → Nicaragua 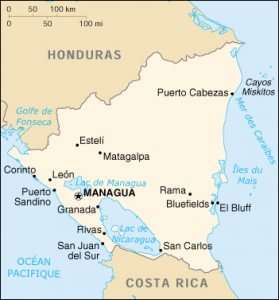 A very poor country torn between North and South

Nicaragua is a Central American country bordered by Costa Rica to the south and Honduras to the north. It is bathed by the Pacific Ocean to the west and the Caribbean Sea to the east.
Nicaragua is one of the poorest countries in the Americas. With one in five people living below the poverty line, there are many social and health problems facing the country’s leaders. And that, not to mention the corruption that has become widespread since the overthrow in the 1980s Sandinistas by the Contras, aided and funded by the CIA, which itself financed its activities by drug trafficking. This illegal war has left tens of thousands of victims, mostly civilians.
Today, the Sandinistas are back in power, through elections, and the country is headed by President Daniel Ortega. He has made many concessions to the opposition, including making abortion illegal, even therapeutic or resulting from rape! A real turning back for women’s rights, conceded to the Catholic Church in exchange for its political support. The president has since been trying to stay in power at all costs, creating an authoritarian regime and favoring nepotism.