You Are Here: Home → El Salvador 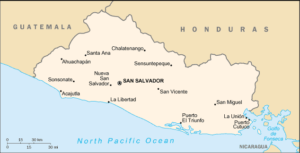 El Salvador is the smallest country in Central America. It is nevertheless the most densely populated, and is highly industrialized in comparison with its neighbors. It is bordered by Guatemala to the northwest and Honduras to the north and east. It is bathed by the Pacific Ocean.