You Are Here: Home → Guyana 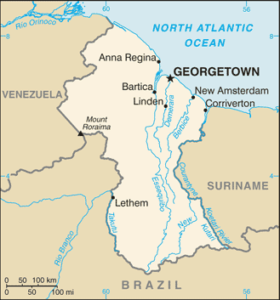 Will the oil discovery benefit the greatest number?

Guyana is a state in South America located on the shores of the Atlantic Ocean. It is surrounded by Venezuela to the west, Brazil to the west and south, and Suriname to the east. It is the only English-speaking country in the South American sub-continent. It is part of the British Commonwealth, but unlike many of its member countries, it is not a monarchy, but a republic.