You Are Here: Home → Togo 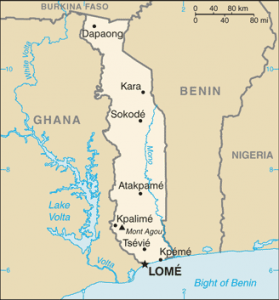 Togo is a country located in West Africa. It is one of the smallest African states, stretching about 700 kilometers from north to south with a width not exceeding 100 kilometers, bordered to the north by Burkina Faso, to the south by the Gulf of Guinea, to the east by Benin and to the west by Ghana.