You Are Here: Home → Faroe Islands 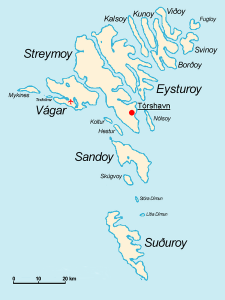 The Faroe Islands are a sparsely populated subarctic archipelago, located between the Norwegian Sea and the North Atlantic Ocean, halfway between Scotland in the United Kingdom and Iceland. The Faroe Islands form a constituent country of the Kingdom of Denmark, with Denmark and Greenland. They have been an autonomous province of Denmark since 1948.

The territory lives mainly from fishing and aquaculture, of which it exports the majority of products to the European Union. Almost half of the population lives in the capital’s urban area, Tórshavn.