You Are Here: Home → Ecuador 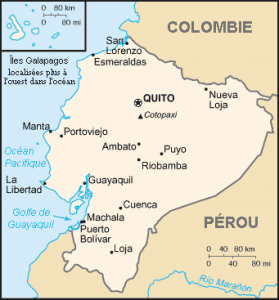 Ecuador is a country in South America, bordering Peru to the south and east and Colombia to the north and east. It is bathed to the west by the Pacific Ocean.
A small country in South America, Ecuador is full of invaluable natural resources, including oil and natural gas. Long exploited by foreign multinationals, these resources had so far been of little benefit to Ecuadorians.