You Are Here: Home → Pitcairn Islands 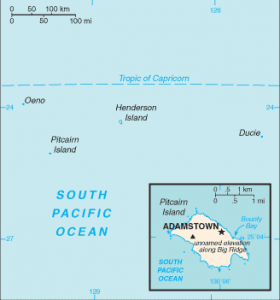 One of the most isolated places in the world

Pitcairn is a small archipelago belonging to the United Kingdom and whose main island is Pitcairn, the other islands being Oeno, Henderson and Ducie. Pitcairn is located 2,078 kilometers west of Easter Island, Chile, and 2,182 kilometers southeast of Tahiti, French Polynesia.

The territory benefits from an exclusive economic zone that covers nearly 560 000 km2. Pitcairn Island is the only one of the four islands to be inhabited. Isolated from the world, the territory is very sparsely populated. Its inhabitants are descendants of the Bounty mutineers and their Tahitian women.