You Are Here: Home → Panama 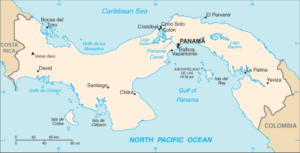 Panama is a state located at the southern tip of Central America, on the Isthmus of Panama. It borders Costa Rica and Colombia, and is bordered on the south by the Pacific Ocean and north by the Atlantic Ocean.
Its position of international crossroads allows it, thanks to its essential channel to the global maritime traffic, to withdraw a very large part of its wealth of its geographical situation.
The increase in recent years of global trade by boat has allowed the country to see its economic growth explode. These new riches are reinvested in infrastructure projects, roads and bridges in particular, but also concerning the famous Panama Canal.
It has greatly increased its capacity thanks to an enlargement allowing to pass larger ships. These important investments should help the country to grow its income even faster.
A wealth that should be redistributed equitably, which is not currently the case. A large part of the country (about 25%) still lives very poorly, mainly in rural areas, which are emptying in favor of shantytowns still encircling the capital Panama, which grows inordinately.