You Are Here: Home → Channel Islands – Jersey and Guernsey 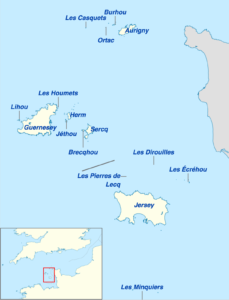 The Channel Islands are a group of islands located in the English Channel to the west of the Cotentin Peninsula in France. They include two Crown dependencies: the Bailiwick of Jersey, which is the largest of the islands; and the Bailiwick of Guernsey, consisting of Guernsey, Alderney, Sark and some smaller islands.
They depend directly on the British Crown, but are not, however, part of the United Kingdom: they are under the sovereignty of the Duke of Normandy, a title held by the English monarchy since the conquest of England by William the Conqueror after the Battle of Hastings in 1066. Their great autonomy guaranteed by this status means that, unlike in the United Kingdom, the Channel Islands are not part of the European Union, but are associated with it.