You Are Here: Home → Ireland 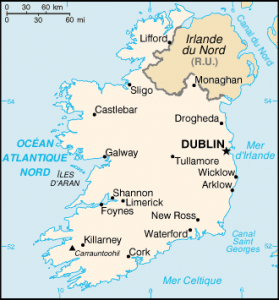 Ireland is a Western European country located in the North Atlantic Ocean, west of the United Kingdom, and a member of the European Union since 1973. It is a republic that extends over 26 of the 32 historic counties of the island of Ireland which it shares with Northern Ireland (the remaining six counties), remained a constituent part of the United Kingdom.